What You Should Know About CBD Oil for Cats

CBD isn’t new. Unless you’ve been living under a rock for the last decade you’ve likely heard of it. It stands for ‘cannabidiol’ – also known as CBD oil,... 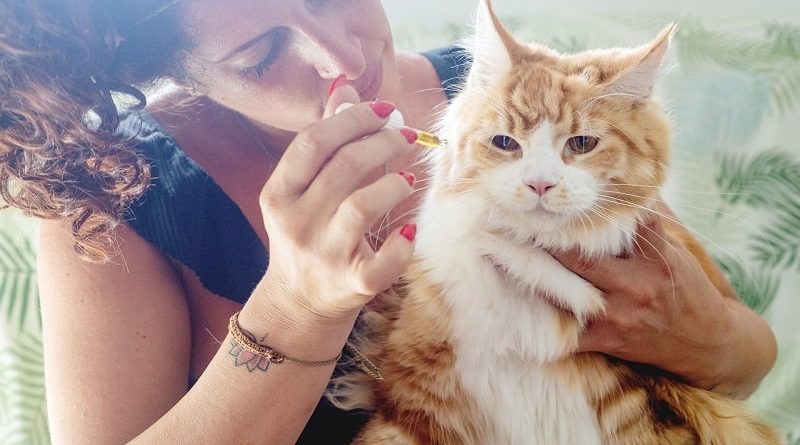 CBD isn’t new. Unless you’ve been living under a rock for the last decade you’ve likely heard of it. It stands for ‘cannabidiol’ – also known as CBD oil, a compound known widely for its ability to assist with issues like anxiety, inflammation, gut health, and more. It was even found to have antimicrobial and antibacterial properties in a recent study from the University of Queensland. But not only is it effective and showing huge promise amongst human subjects, but CBD is also showing promise in a broad range of areas including pet health for horses, dogs, and our furry friends – cats.

In this review we’ll be looking comprehensively at the health effects of hemp extract oil on cats, including its benefits, potential side effects to be aware of, when and how to use it. You’ve likely already heard of hemp oil’s anti-anxiolytic, pain mitigating, and inflammatory reducing effects. As hemp oil spreads further in popularity in Australia and develops beyond the stigma of old surrounding cannabis, its accessibility and usage will further increase, both for humans and cats.

Our aim here is to help you get the best outcome for your cat – ensuring it is healthy, vital, and can live well day today. We’ll give you the step-by-step to ensure you know about dosage and all the other small considerations to know when using hemp oil – so let’s get started.

What is CBD Oil?

Ok, so we’ve briefly touched on and introduced the topic of CBD oil for cats. But what is this? CBD is a cannabinoid – one of many in the cannabis or hemp plant. Others include CBN, CBG, and CBA. Each of these has differing physiological effects and benefits, but the most renowned and powerful in terms of its health effects for pets and humans is cannabidiol or CBD. It’s bioactive – meaning it can be metabolized and used by the body for both humans and pets. One of the other well-known compounds is THC – which is what causes the euphoric ‘high’ and psychoactive effects of marijuana. Hemp is completely different, however, not causing a high and not being psychoactive – its effects lie in the therapeutic spectrum.

One of the key selling points and benefits of hemp oil is it’s natural and from plants – you don’t need to worry about preservatives and inorganic compounds that can have nasty side effects on the body and liver. You can also rest easy knowing it’s a supplement and plant food that’s been used since ancient times across many cultures – from the middle east to Central Asian tribes (it has been found with remains of the Mongols) as well as through Greece and Europe in more recent times. The therapeutic and anti-inflammatory effects of CBD oil were known by the ancients and widely used to assist with common health issues.

But how do these effects get metabolized and used by the body? The answer lies with a special system known as the endocannabinoid system, which is present in cats and humans (also known as the ECS). The ECS supports an array of bodily functions including memory, mood, immune system, and more. It also connects to many organs in the body as well as muscles and joints through receptors known as the CB1 and CB2 receptors, which are activated when cannabinoid compounds bind with them and release endogenous (produced by the body) compounds that stimulate the body’s anti-inflammatory response.

Cat’s experience many of the same symptoms and diseases as humans – like anxiety, arthritis, psoriasis, and more. Most of these issues relate to inflammation, which is what hemp oil can assist with and mitigate. A lot of cats particularly are jittery and prone to anxiety disorders from loud sounds or the stresses of modern-day living in cities – surrounded by large vehicles and machinery. CBD can help to calm them and reduce their stress states and cortisol, to bring them back to a more manageable level. Cats also benefit from the unique blend of nutrients and Phyto-compounds that hemp oil can provide – including flavonoids, Phytocannabinoids, terpenes, and antioxidants.

Typically, hemp oil is known by the term ‘tincture’ which just means the cannabis oil has been suspended or combined with an inert carrier oil like MCT, coconut oil, or olive oil. The carrier oil helps the body (human or pet) absorb the compounds of hemp and allows the body to take in its beneficial effects better through healthy fats.

But how is hemp oil produced? It’s a multi-phase process that involves stripping the hemp plant of its valuable buds, flowers, and leaves (called trimming), drying the plant matter out, before running solvent through the plant matter to extract its oils. Solventless processes are also used which use CO2 gas extraction to generate the final hemp oil product. With the final product being completely from plants (a plant oil), it’s entirely non-toxic, non-addictive, and healthy.

Much of the research on CBD is in its early stages both for pets and humans. There have been several studies in the scientific community however that indicate it is safe, beneficial, and useful for animals like dogs, cats, and well humans. Some of the key ones were a 2017 study from the World Health Organisation that cleared hemp oil as non-addictive, nontoxic, and beneficial as well as a recent 2020 study by Queensland University that showed it had beneficial antibacterial effects that may have future therapeutic benefit.

When it comes to cats the research is sparse – most of the studies to date clinically have focused on humans or dogs (or rats). Overall, the metabolic processes are similar. We don’t recommend using hemp oil to treat any illness – make sure you take your cat to the vet – but rather as a health supplement to assist with overall wellbeing. It’s important to take note that like humans, cats all react differently when it comes to hemp extract oil (and all other chemical compounds). This is due to genetic and immune system variations between individuals, which is something to be careful of.

You can think of CBD oil as a holistic and wellbeing-enhancing product – it helps to bring overall calmness and improved nutritional health to your cat. Most cats don’t see any negative issues or side effects and vets will attest to that. There’s also a bounty of anecdotes from pet owners saying their cats have seen improvements from hemp oil without downsides but in starting out with the supplement, small dosages at a time should be used to test and assess whether the individual cat will have any reactions. Controlled and small dosages are key to ensuring cats don’t have negative side effects from the outset.

While CBD is safe and can be used with pets including horses, dogs, and cats, THC is not – it’s toxic to most pets and can cause toxicity if ingested. Avoid using THC with pets or any kind of marijuana (as opposed to hemp) based products. Although side effect risk is minimal, the most found side effect (rare still) is lethargy in the cat and lowered energy. This is particularly pronounced when cats are given high doses, which can lead to other side effects like anxiety, nausea, loss of appetite, or stomach issues. We recommend against high dosages and always advocate for a ‘vet first’ approach when it comes to your pet’s health.

Always ensure your oil product is from hemp, not marijuana to ensure it contains no THC which can harm your pet. Industrial hemp contains no THC and only CBD (of varying quantities depending on the plant breed and quality) but is careful to clarify this and avoid any risk. We also prefer oils or tinctures as they can be administered precisely by the drop, which means dosage control to a very specific and restrained level. Oils are also great as they can be stealthily placed in cat foods and provided daily with a minimal issue as the cat typically won’t even detect the scent or flavour which is great for picky cats.

About the Endocannabinoid System

Receptors known as CB1 and CB2 present throughout cats are what deliver the beneficial therapeutic effects of hemp oil in felines. These receptors are triggered when cannabinoids like CBD bind with them, releasing a potent amount of anti-inflammatory and anti-anxiolytic chemicals that help to soothe the mind and body. Supporting this is the vitamins and minerals contained in hemp oil – including E, magnesium, zinc, and manganese. The receptors are also located in the brain and brain stem which is how hemp oil can assist with areas like anxiety in cats.

The ECS is separate from metabolic functions which cause highs. Taking CBD oil won’t result in your cat being inebriated or high (same as humans) as it doesn’t contain THC. THC is also illegal in many countries which hemp oil helps avoid. It’s from hemp which is a sub-crop of cannabis (like marijuana) that doesn’t have THC in it. Cannabis is typically used as an umbrella term for all the sub-crop or subspecies of the plant. Hemp is also used for a range of industrial purposes like producing bags, rope, clothes, and even enriching and reinforcing concrete.

To wrap up – we’ve run through a comprehensive amount of detail on what CBD oil for cats is, its key benefits for the feline physiology, some important risks and ‘watch outs’ to note, as well as giving you a rundown on some of the key methods of using hemp oil with regards to product types, administration, and dosage. We personally love using this great health supplement with our cat – both for improved longevity, wellness and helping them age gracefully and avoid the complications of stiff and painful joints or gut inflammation.

It’s key to dosing low initially and assess your cat’s reaction ongoingly prior to upping any kind of supplement dose with your furry friend. Always be careful and cautious. Avoid using products from non-vetted suppliers and ensure your oil is GMO and pesticide-free to prevent any toxicity.

Best Use of CBD Oil For Alzheimer Patients: How You Can Find The Right One