Hemp vs Marijuana | The Difference Between Hemp and Marijuana for You

Hemp and Marijuana are the same plants, part of the botanical family of the Cannabaceae (a subset of the order of plants Urticales). The distinction between hemp and marijuana... 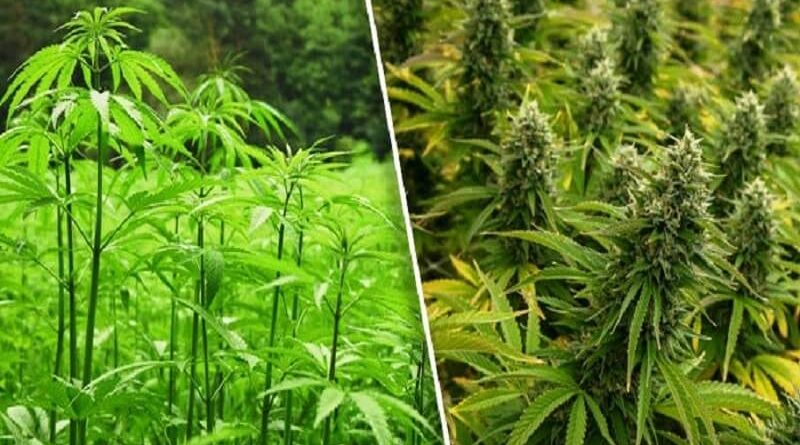 Hemp and Marijuana are the same plants, part of the botanical family of the Cannabaceae (a subset of the order of plants Urticales). The distinction between hemp and marijuana is therefore only lexical and due to the common use of the terms. It would be more correct to always talk about hemp, both when we mean the textile variant, and when we mean the psychoactive one.

The two distinct names to define the two different uses are simply used by convention: the word hemp means the variety that was produced in large quantities in Piedmont, Emilia Romagna, and southern Italy, and which is used to produce food (seeds, oil, flour), bio-fuel, paper, fabrics, cordage, cosmetic and material products (often innovative and very efficient) and for green building.

It is almost devoid of THC (or rather contains only minimal concentration), the active ingredient that causes the “high”, and therefore has no psychotropic effect. Its cultivation in Italy is legal and regulated (for those interested here is an article about it: what to do to grow hemp). For years industrial hemp was one of the leading sectors in Italy and in the world, our country was the second world producer (a traditional production of which some beautiful photographs remained).

To give an idea of how widespread the use of hemp was, just think that even the United States Constitution was written on hemp paper. In short, it was a plant that allowed almost everything to be done with oil and its derivatives in an economic and ecological way.

The term marijuana means the variant of hemp rich in THC and therefore a psychoactive effect. This is the plant sung by Bob Marley and symbol of the hippie culture (and at the same time by the important and increasingly widespread medical and therapeutic uses). Marijuana is considered a light drug and its cultivation in Italy is prohibited even if more and more countries in the world are legalizing it.

The one used for textile purposes, without THC, is usually the male plant (although not always, there are also qualities of monoecism hemp, i.e. hermaphrodite, and females used for this purpose) while the one with psychoactive effects is the female.

To conclude, it is still important to know that the distinctions between the terms hemp, cannabis, and marijuana are completely arbitrary. As already mentioned, the scientific name is the same, precisely due to the fact that it is the same plant. The distinction of the name marijuana from that of hemp occurred in the 1930s (in this article it is discussed in depth).

Hemp and cannabis are two words that are often confused and used as synonyms, but the difference in meaning is there, although very subtle.

First of all, Hemp and Cannabis are the same plants, or they are part of the botanical family of Cannabaceae. The distinction between hemp and cannabis is therefore purely lexical and due to the use that is made of the plant, therefore if used on an industrial level or for recreational-curative purposes.

Hemp and cannabis differences: the plant

To clarify it is important to understand what hemp is and how it is grown. We have already said that cannabis and hemp are the same plant base, of which there are multiple varieties.

Normally, the most cultivated types of hemp are the Hemp Sativa, the Hemp Indica, and the Hemp Ruderalis, which differ in shape, size, cultivation methods, and sun exposure and quantity of THC and Cbd inside them.

The Hemp plant, and in particular the Hemp Sativa, when grown in open environments can reach up to two meters in height, without the need to be fertilized or treated particularly, reaching maximum development within about six months.

If grown indoors and subjected to optimal artificial lighting, the methods and timing of which may vary depending on the specimen, the plant can reach productive maturity within much shorter times and can be exploited to the maximum, especially in the case of auto-flowering specimens.

The hemp plant is spontaneous dioecious, with male flowers and female flowers. The flowering tops of the female plants, or the excrescences present on the specimen, are those that are collected and processed for recreational and medical purposes.

There are numerous scientific studies and research projects aimed at demonstrating and closely studying the effects of hemp on living organisms. Furthermore, we are trying to define the various types of Cannabinoids present, that is, of the active principles of the plant responsible for the various effects on human beings. Many of the analyzed Cannabinoids, such as the THC or the CBD, have innumerable therapeutic properties recognized as the curative action of neurodegenerative diseases and the immuno-modulating effects. It is precisely cannabinoids that make the difference between hemp and cannabis clear.

THC is the most famous cannabinoid since it is the active ingredient associated with the psychoactive effects that have made Cannabis illegal in many countries of the world. The effects of this substance are variable and often, but not always, depending on the quantities taken. THC causes euphoria, relaxation, weight, and appetite (the famous chemical hunger) even with minimal assumptions.

CBD is another substance, often confused with THC. In reality, this cannabinoid has very different properties from THC, but the scarce amount of information has led to a general ignorance on the subject and to a spread of incorrect information. The CBD has no psychoactive properties and is indeed considered a totally safe substance, although there are still numerous studies in progress in this regard.

However, CBD has been shown to have particularly effective effects in the treatment of diseases and disorders such as schizophrenia, social anxiety, and depression. It is also good as a painkiller in case of intense migraine, muscle spasms, and inflammation. Moreover, it is an excellent treatment against many psychotic symptoms of various kinds, without causing any side effects of any kind to those taking this cannabinoid.

What then is the difference between hemp and cannabis?

As we have said, it is the same plant. What distinguishes cannabis and hemp is their genetic picture: the real difference lies in the quantity of THC, or Tetrahydrocannabinol, whose presence is clearly superior in cannabis and whose percentage goes from 0.3% (in the case of Cannabis light) upward.

Hemp and Cannabis: differences and uses

The main use of hemp is the industrial one. Hemp, in fact, being a material rich in active principles and particularly resistant, today it is very well known and used in various sectors, from the textile to the food and paper industries, but also in the cosmetic and innovative sectors of bio building. Cannabis, also more commonly called Marijuana, a Mexican term coined to refer to cannabis used in recreation, is exploited by man for recreational and medical and therapeutic purposes.